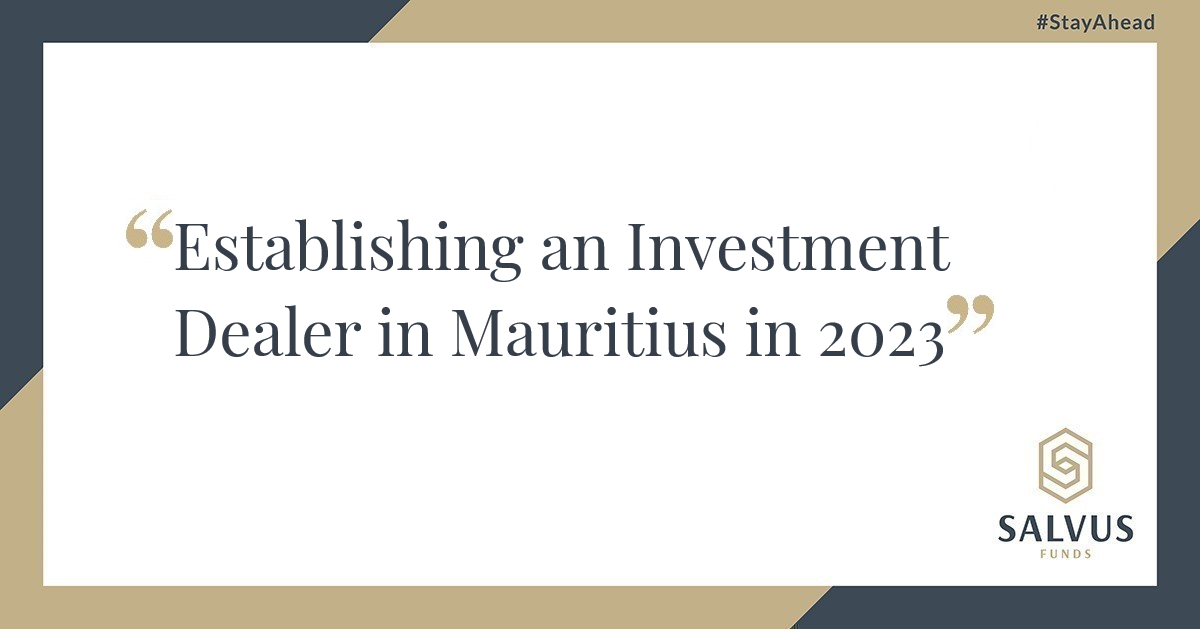 Establishing an Investment Dealer in Mauritius in 2023

The Republic of Mauritius’ efforts in becoming a sound, reputable and competitive financial and investment services centre are of note. These have been significantly strengthened by the establishment, development and growth of the Financial Services Commission (FSC), Mauritius, the regulator tasked with the supervision of the non-bank financial services sector and global businesses.

The FSC Mauritius is committed to the development of a fair, transparent and efficient financial system by licensing, regulating and supervising the sectors of securities services, insurance services and virtual assets services. This has attracted the attention of startups, of existing financial groups and firms interested in expanding their reach and presence through this evolving part of the world.

In this article, the SALVUS Investment Firms Licensing team discusses the establishment of an Investment Dealer licensed entity in Mauritius, its advantages and other important information on this matter, as follows:

1. Why are businesses established in Mauritius?
2. What is the applicable Regulatory Framework for Investment Dealer licensed entities?
3. License Categories and Capital Requirements
4. What are the licensing requirements?
5. How SALVUS can support your licensing application

1. Why are businesses established in Mauritius?

The Republic of Mauritius offers a unique combination of political, social and financial advantages from which an investment firm can benefit from. Mauritius is a member of the African Union, the United Nations, the World Trade Organisation, the British Commonwealth, the International Organisation of La Francophonie and the Common Market for Eastern and Southern Africa, among others.

The country maintains strong relations with countries from every continent, a fact confirmed by the extensive network of more than 40 double tax treaties and 28 investment promotion and protection agreements. Friendly relations with African states have allowed Mauritian-based investors and firms to enter African markets. Furthermore, the political heritage and dependence of Mauritius on western markets have resulted in the creation of substantial ties with the European Union Member States.

The strategic time zone enables business to be conducted with Africa, Europe, Asia and America on the same day. This is further strengthened by the skilled and well-educated bilingual workforce, speaking both English and French. Mauritius has developed a hybrid legal system based on English and French laws and has retained the United Kingdom Privy Council as its ultimate court of appeal.

Additionally, the well-capitalised and sophisticated banking sector facilitates the day-to-day operations of an investment firm with its clients and transactions with different providers around the globe.

2. What is the applicable Regulatory Framework for Investment Dealer licensed entities?

Operating under an Investment Dealer license in Mauritius requires compliance with the provisions of the Securities Act of 2005, as amended from time to time. The said Act is further reinforced by additional rules and regulations published by the FSC for matters concerning licensees in the securities sector. Such matters can be relevant, inter alia, to:

In addition, any financial institution is subject to the requirements of the legislative framework developed for the prevention of money laundering, terrorist financing and corruption. This is comprised of the following acts:

The minimum required capital stated for each Investment Dealer license is directly connected to the nature, scale and complexity of the services prescribed under each category. In each case, the applicant shall maintain the minimum stated unimpaired capital or its equivalent in another currency in order to initiate operations.

4. What are the licensing requirements?

There are several requirements for the Investment Dealer license regarding the organisational, compliance and operational aspects of the business, which include:

5. How SALVUS can support your licensing application

The SALVUS Investment Firms Licensing team has developed an effective project management approach targeting the specific characteristics of each licensing project. Due to our extensive knowledge and expertise, after discussing your business vision and objectives we provide you with the most suitable selection of license categories for your business plan.

We work in coordination with our client’s team to gather all the necessary information and prepare the required paperwork for the submission of a complete application, following regulatory guidelines. Furthermore, we support the efficient allocation of the entity’s financial resources by utilising a combination of human resources, outsourced arrangements and third-party providers.

If you are interested in applying for an Investment Dealer license or you would like more information about investment activities in Mauritius, contact us at [email protected] or call us at +357 7000 7898.

The information provided in this article is for general information purposes only. You should always seek professional advice suitable to your needs.

How to prepare the AMLCO Annual Report in 2023